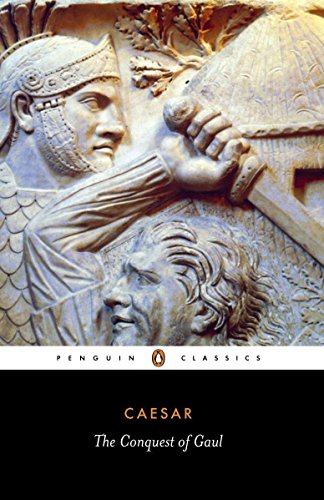 Gallia est omnis divisa in partes tres... It is, perhaps, the most famous opening line of any memoir in Western civilization. What Caesar and the Romans called "Gaul," although we usually think of it as France, also comprised Belgium, the German lands west of the Rhine, southern Holland, and much of Switzerland. This is the only military campaign of the ancient world for which we have a chronicle written by the general who conducted it, and Julius Caesar is an insightful historian, with a keen eye for detail, as in this scene from the repulsion of the forces of the German king Ariovistus:

Caesar placed each of his five generals ahead of a legion and detailed his quaestor to command the remaining legion, so that every soldier might know that there was a high officer in a position to observe the courage with which he conducted himself, and then led the right wing first into action, because he had noticed that the enemy's line was weakest on that side.