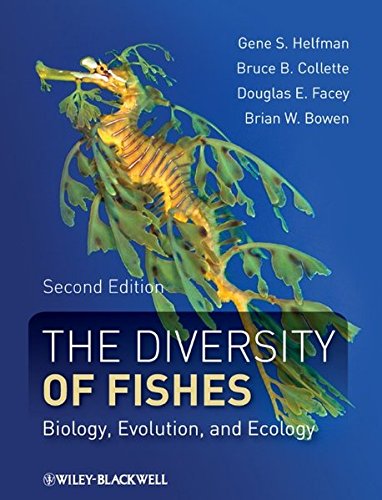 The second edition of The Diversity of Fishes represents a major revision of the world's most widely adopted ichthyology textbook. Expanded and updated, the second edition is illustrated throughout with striking color photographs depicting the spectacular evolutionary adaptations of the most ecologically and taxonomically diverse vertebrate group. The text incorporates the latest advances in the biology of fishes, covering taxonomy, anatomy, physiology, biogeography, ecology, and behavior. A new chapter on genetics and molecular ecology of fishes has been added, and conservation is emphasized throughout. Hundreds of new and redrawn illustrations augment readable text, and every chapter has been revised to reflect the discoveries and greater understanding achieved during the past decade. Written by a team of internationally-recognized authorities, the first edition of The Diversity of Fishes was received with enthusiasm and praise, and incorporated into ichthyology and fish biology classes around the globe, at both undergraduate and postgraduate levels. The second edition is a substantial update of an already classic reference and text. Companion resources site This book is accompanied by a resources site: /go/helfman The site is being constantly updated by the author team and provides: * Related videos selected by the authors * Updates to the book since publication * Instructor resources * A chance to send in feedback

Review
"This new edition of the Diversity of Fishes, with its comprehensive view of fish biology sensu latu, should be welcomed by teachers, students, and professional ichthyologists. The book, with its colored photographs and good drawings, is attractive; the errors are few; the authors are authoritative; the index is informative; and the content has been brought up to date." ( Environmental Biology of Fishes, October 2010)

"Overall, The Diversity of Fishes is, in our opinion, the best current single–volume reference for teaching students about fishes, and if we had to condense our ichthyological libraries to just one book, at the moment this would certainly be it." (Copeia, 2010)

"The book combines broad and comprehensive coverage with quite a lot of detail about the different themes that are dealt with ... .I heartily recommend the second edition of The Diversity of Fishes, both as a student textbook and as an introductory, general source of reference." (Aquaculture International, May 2009)

From the Back Cover


Gene S. Helfman is an Emeritus Professor of Ecology in the Odum School of Ecology, University of Georgia. He retired after 30 years of conducting research on and teaching about ichthyology, animal behavior, and conservation biology. His research focused on the behavioral ecology and conservation of fishes in lakes, streams, coastal oceans, and coral reefs. In addition to contributing to this textbook, Helfman in 2007 published a highly acclaimed reference and text, Fish Conservation: A Guide to Understanding and Restoring Global Aquatic Biodiversity and Fishery Resources. He received a BS from the University of California, an MS from the University or Hawaii, and a Ph.D. from Cornell University.

Bruce Collette is a Senior Scientist at the National Systematics Laboratory of the National Marine Fisheries Service based in the National Museum of Natural History, part of the Smithsonian Institution in Washington, D.C. He studies the systematics and evolution of several groups of epipelagic fishes such as tunas, mackerels, halfbeaks, and needlefishes and benthic fishes such as toadfishes and has published over 250 papers on these and other fishes. He has co–authored books on fishes of the Gulf of Maine and Bermuda. He received his BS and PhD degrees at Cornell University.

Brian Bowen spent the summers of his youth snorkeling in Cape Cod Bay, where he learned to appreciate fishes. Dr Bowen is a researcher at Hawaii Institute of Marine Biology (University of Hawaii), with over two dozen research expeditions, and over 100 publications on the conservation genetics of fishes and other vertebrates. He holds a M.A. degree from Virginia Institute of Marine Science, a Ph.D. from University of Georgia, and is a fellow of the American Association for the Advancement of Science. Currently Dr. Bowen works on fish five days a week, and on the weekend prefers to go fishing.