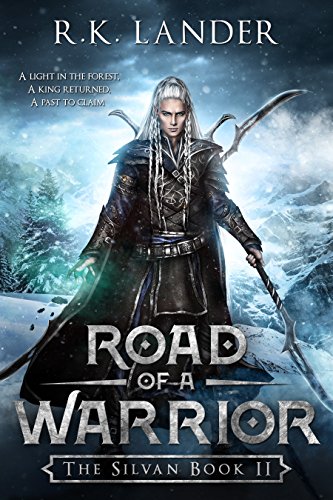 Fel'annár is an immortal half-blood warrior from the Deep Forest, an orphan whose questions were never answered. With a dream of becoming a Silvan captain in an army ruled by the Alpine elves, he is sent to protect a prince of the realm on a journey to Tar'eastór, land of the mighty Alpine elves and of Fel'annár's own father - whoever he was.

His nascent powers continue to evolve while his shrouded past finally surfaces. The truth he never thought to hear will thrust him onto a path strewn with political intrigue, discrimination, self-discovery – and danger.

Meanwhile, a failing king will rise from the depths and reclaim his place as leader of the Great Forest. Warriors will battle the enemy on the borders, while at court, councillors will clash over the racial divide that is tearing them apart.

They say that civil war is coming, but one elf can avoid it - if he can embrace his past, control his powers and accept the role he is destined to play. From warrior to master and beyond, Fel'annár is The Silvan who can restore peace in the Great Forest, or cast it into eternal chaos.


Road of a Warrior is the second book in the epic fantasy series The Silvan, by R.K. Lander. If you’re looking for non-stop action and a story of family, friendship and valor, don’t miss out on this stunning second installment.

What Amazon readers are saying …

“I am well into my cynical fifties and devour my books as if there is no tomorrow. With today’s opportunistic politicking and depressingly polarized thinking I need my escape and this series delivered wonderfully well. I had tears in my eyes during several moments in the series and when you can do that to me, you deserve your 5 stars.”


“I started the first volume on a whim at 2pm. At 9 pm I was finished and immediately bought volume 2. At 5am the end of volume 2 was staring at me and I had no idea of the passage of time, so enthralled was I with the story. Now I feel the passage of time as I wait, starving for the continuation of such a wonderful story.”


“Book one was a good read. Book two brought tears.”


“Such a awesome book. Detail, descriptive and flowing. I had to force myself to go to bed at 3am, I was so intrigued.”


“I am utterly intrigued with this creation.”


“I have been wanting and waiting for a book like this for a long time. It is mature fantasy and mature writing - an absolutely cracking book. I can't remember how long it's been since I felt this excited about a book that's not yet even in print.”


“Hands down the best high fantasy series I have read for a long time. Can't wait for the next book!”


“The story continues and the writing just gets better. You will smile, laugh, cringe, and you will want to cry. And, most of all, you will want more.”